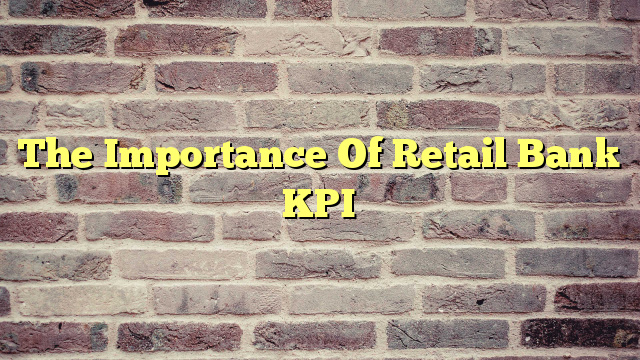 Retail banking has also faced challenges in the matter of measuring abstract and quantifiable indicators. Performance metrics in retail banking can be done using KPI. The retail bank KPI can be utilized to measure the progress of a certain organization belonging to the retail banking industry. This measure is intended to help retail banks improve their progress towards the achievement of their organizational goals.

What are the key performance indicators of a retail bank?

The KPI in retail banking may include the factors that have links to the performance of a retail bank. There may be several KPI to measure the retail bank’s performance. However, it is important to keep the number of KPI to a minimum and to choose KPI’s that have direct attributes to its performance.

The total cash deposits held in a month and the average annual deposits held can be used as KPI’s, to measure the performance of a retail bank in the matter of attracting deposits from customers.

Other factors that may be considered as KPI’s in retail bank:

2) Average withdrawals made by each depositor

4) Average number of default borrowers in a year

5) Average number of credit cards issued by the retail bank

8) Average number of customers served in a day

Income, cost, investment returns, interest margin, and company assets are other retail bank KPI’s. Retail banks may have their own system for recognizing KPI. The KPI’s are measurable and quantifiable and must be identified to assess the performance of retail banks.

Certain attributes are also considered to recognize a measurable factor for performance evaluation as KPI. Identifying KPI’s is crucial and must be taken into careful consideration before they can be used as objects for performance measurement. The acronym SMART can be used for identifying KPI’s. KPI’S must be specific, measurable, achievable, relevant and time-bound.

Aside from the aforementioned KPI’s that can be used for performance measure, one of the measurement framework used in financial institutions is the risk-adjusted return on capital.

The risk-adjusted return on capital or RAROC can be utilized to make analysis on risk-adjusted financial performance. It is the ratio of return to capital with adjustment on certain risks involved in the process. As it is known in the financial world, capital invested on high-risk form of investment is likely to yield higher returns than risk-free investments.

RAROC can be used as a retail bank KPI alongside with other indicators.

The retail bank has an exact environment to identify KPI. Normally, banks are organized financial institutions that abide the law in making transactions with depositors, clients, and customers. And normally, the KPI is used to detect problems so the entity can formulate solutions based on the given indicators used to measure its performance.

Top management of retail banks analyze KPI’s to accurately measure the performance. Retail bank KPI;s can be financial or non-financial metrics. There may be involvement of demographics of clients and depositors, rates of turnovers, backgrounds of bank personnel, and technology used.